So, I’m not an innovative genius, The Eve Collective was not an inspirational lightning bolt from the deep dark abyss that is the creative muse; I totally stole the idea!

So I’ve spent quite some time focusing my practice on, reading around, engaging with other creatives about, watching relevant pod casts and ted talks on, and bothering my mates at dinner parties with deep discussions regarding, Sustainability. Obviously, I even write about it sporadically as a part of my blog. I’ve over explained how dreadful the fashion industry is, I’ve heard a thousand other people from multitude backgrounds tell me in an infinite variety of ways this same thing.

I’ve watched small fashion companies from all over the world pitch their ingenious, creative, fantastical and often just fabulously practical collections and strategies to diminish or even cancel out the damage that fashion consumption visits on our planet, negatively impacts on our economy and un-enriches our lives, with. There are so many exciting and amazing project going on all over the place, but in many ways, we as humans, and in particular humans from the UK are slow on the uptake and the concept of clothing rental as a method of fashion consumption is no exception.

During my significant internet wanderings into the unmapped and unexpected terrain of eco fashion I came across the Lena Library in Amsterdam. This magnificent initiative was the brain child of a group of awesome women; It’s a quality everyday clothing rental boutique, and it’s super awesome.

As the start point for the Eve Collective line of enquiry in my practice, I’m totally fan girl-ing the place and super keen to go visit the store myself and interview the owners, to see exactly how their initiative is working in practice, as they have been successfully operating for 10 years adding a website to their store in Amsterdam in 2015. Head scratching ensues as I try to work out when/how I’ll get to this fabulous store in the next few months.

Fortuitously a friend of mine is getting married in June. As a citizen of many a town she has been engaged in a hard-core Hen Tour since February. We met on a beach in Cornwall last August and spent a lovely day wrapped in blankets behind a wind break drinking cider as our children in their wetsuits launched themselves from the harbour wall and a diving platform into a freezing Atlantic Ocean. During the huddle phase of our day, we discussed her plans to Hen in Amsterdam. After zero minutes of consideration I was in, explaining that I would happily engage in seriously messy Hennanigans, but I’d need to get some work/research done too. Terms agreed; I signed up. 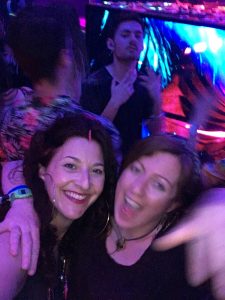 Having visited The Dam a few times in my youth (for the culture obviously), I wasn’t entirely convinced that I had enough party in me to manage a 3 day tour of Amsterdam. An 11 am bar crawl commencement, a canal cruise with the funniest and darkest tour guide ever, the odd coffee shop, a beer bike, dancing ‘til dawn with some man on stilts, emergency pizza for breakfast later and I managed to haul my ass to the Lena library, quite sensible, and tidily dressed. Apparently I still can, when required, survive some serious party. 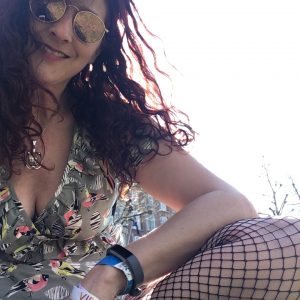 The Lena library is a beautiful store situated on the Westerstraat, surrounded by traditional cloth and clothing markets on Mondays, which is when I got there. The store itself felt like an exclusive but laid back boutique. It was chic in decoration, plenty of light and airiness, with a beautifully curated collection of designer and vintage cothing, in a perfect state of repair. Behind the sales counter was a washing machine and dryer, currently in use and the entire place smelled of amazing fresh laundry. Juultje (which translates to Little Julie) was managing the store, and was really excited to explain all about Lena, its history and how it worked. She was super helpful after I got past my total nerd out fan girl nerves and struck up some conversation with her. 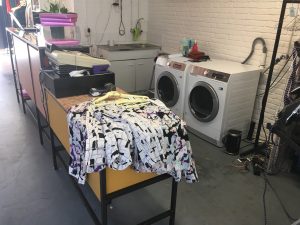 The Lena library works on a very local basis, from one store, which is separated into shop front and annexed storage with photo studio area. There are plans to expand, but they are still working on how the initiative works, aren’t over extending what they do, right now they are successful. 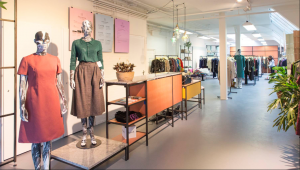 Beautiful store with beautiful things to borrow. If only I lived in Amsterdam!

They operate on a points system, all items are individually marked in points and cost to buy. You can opt to subscribe to a certain points value for the month or as a one off for an individual piece, or you can buy the product directly. They have carefully selected vintage and local designers, chosen to fulfil the needs of their clients, which they have become incredibly familiar with over the last 8 years, which has given the initiative the edge when selecting new lines to add to the collection, maximising product value and minimising waste.

The Website, offering flexibility for busy customers that can’t make it to the store.

The Library works in the all the ways I figured that it would, and it was heartening to see that it had been successfully in trade for as long as it had. It really gave me hope for my own convoluted version of the concept as trialled in The Eve Collective, and hope for the future of fashion shopping. I feel that I am on the right track here, and I am extremely excited to see the outcome of this part of my future practice.

Much gratitude to the Lena library and their fab staff. For more on, and to shop at The Lena Library: